Portfolio > Pink On the Inside - Sequencing

Pink On the Inside is an ongoing graphic novel project, combining drawings, inks, watercolors and oil panels to tell the story of Our Hero (Charlie Chaser). Chaser, who works for a secret department in the Department of Homeland Security, invents a new technology that allows him to control the emotions of all living creatures. After experiencing a romantic betrayal and heartbreak, Chaser uses this new technology to take vengeance on life itself -- and is separated from his conscience, which wanders the world without him. His memory lost in the trauma of his horrific actions, Chaser wanders the wastelands of his destruction, a place now indivisible from the spirit realm, which in the absence of life, moves into Chaser's reality.

Eventually, as he begins to put the pieces back together about the world he has destroyed, Chaser is intervened upon by Hurm the Worm, a seraphim sent to show him his past actions, pass judgement on him -- and deliver his sentence.

Begun in January 2015, Pink On the Inside has been drawn, colored and written over the course of 6 years (and counting), combining elements of sequences combining a variety of styles and techniques, including the black and white sequence working-titled Envy the Dead, the Moloch Sequence, The Journeys of Allen the Chalk-Line Ghost, the Hollow Harvest Sequence, and other work.

New panels in this attempt to organize the second to last sequence in the project will be posted here daily through to the end, after which the last remaining sequence (depicting Chaser's interactions with the spirit world) will be drawn, colored and added top a separate gallery. Once the final sequence is completed, the panels will be organized into one over-arching narrative and all the previous sequences inter-threaded to build the final storyline, and complete the graphic novel for publication.

The panels will appear here below, and are meant to be read left to right. Panels may include additional "director's commentary" text about the panel, or larger movement within the sequence.

Thank you for viewing -- 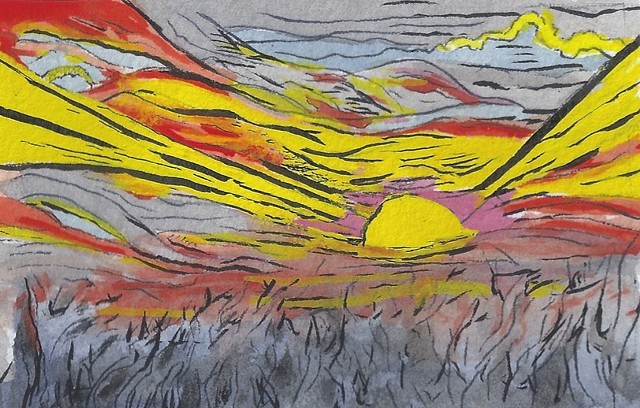 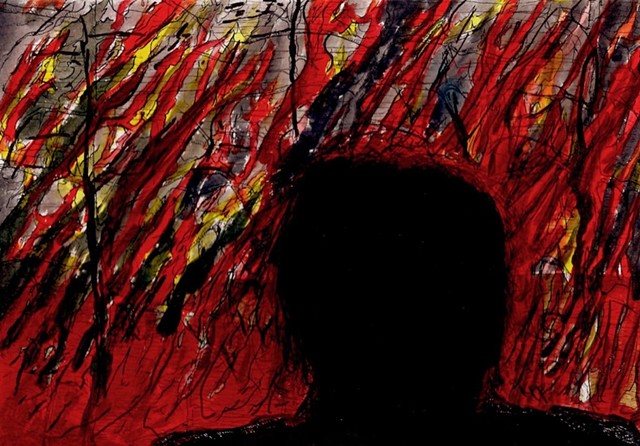 The Infusation of Nature, at the Making of the Burnt Wastes
Pencil, variety of Sakura inks, Windsor and Newton watercolors on Arches.
6 x 9