Moloch as a historical Canaanite figure mythological deity that believers sacrificed their children to pits of fire, often depicted as large cauldrons or ovens. Interestingly, Moloch continues into the Modern day world as a linguistic term meant to indicate something something violent and tragically wrong, such as for example, the Moloch of our gun culture.

Moloch I was an effort to depict both the ancient and Modern meanings of the figure, depicted as a shark-like central Leviathan figure, swallowing a little girl feet first, with other mauled children laying in a river of blood below.

Drawn from reality, this was my attempt to cry out against a reality that destroys and devours innocence like the ancient and terrible Canaanite god did. Children dying in camps, washing up on shores, uncared for and lost.

This painting also incorporates some of my first ideas of trauma as a distortionate lens. I set this on a three-point perspective, but within those points of perspective are intentional distortions, especially in the blue section of Moloch's "wing," which I have referred to as a mirror view into the "eternal realm."

Thanks especially to all those on Facebook who encouraged me to work in oil, and for watching this long process unfold with me, it helps to get through these quiet efforts knowing you're all out there. Thanks for helping make it happen. 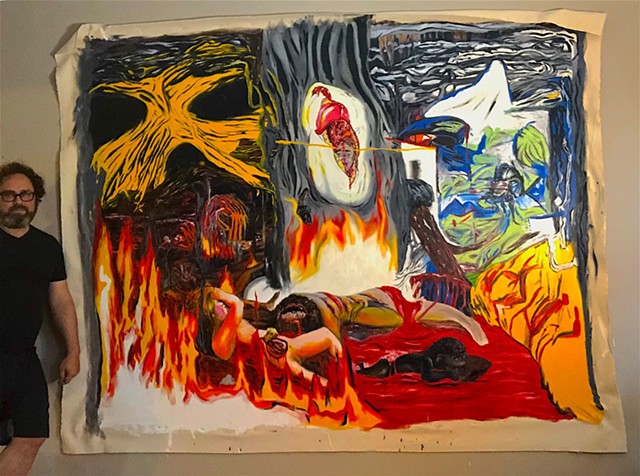 Moloch I
Oil on canvas