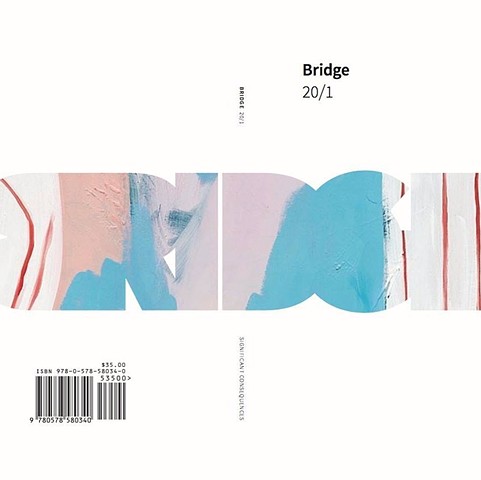 Today, Bridge has reformed as an artist collective, with members serving as department editors of their artistic disciplines. In addition to once again publishing a periodical, we have revived the 501 (c) 3, though with the notable shift of our purpose for registering changing from our previous "Arts & Entertainment" status to that of "Public Charity."

Formed in the late 1990's, Bridge began as a literary journal launched by Marie Walz and I, edited by a small group of artists, and that eventually formed a programming wing that, in turn, developed into a 501 (c)(3) not-for-profit organization and a long-term, interrogative conceptual art project that has, historically, manifested in a variety of ways, including:

as a literary journal launched by Marie Walz and I, edited by a small group of artists, and then magazine. Bridge began in the early-aughts and published roughly 15 editions, with fiction, poetry, essays and more. We published previously unreleased art, literature, interviews, poetry, news and essays from a diverse list of names such as Kurt Vonnegut, Aleksander Hemon, Wislawa Szymborska, Christo and Jeanne-Claude, Catherine Opie, David Cronenberg, and on and on. It won a Pushcart prize, published legions of firsts, and helped define new avant (and arriere) garde standards of art and art-making. Please visit the Reporting & Criticism section for more information.

as an exhibition and art incubator space at 119 N. Peoria in Chicago that fostered young galleries, and gave early first exhibitions to many now-established young artists. It also served as the press offices of Bridge magazine for several years, and as its editorial, marketing and internship offices, which also served as an educational space for many now-important young scholars, curators, artists, critics and writers.

as a project to inveigh against art as commodity, and attempt to redirect the means of distribution into the hands of artists directly, influence and trace the outline of the social, personal and political costs of economic cycles as an exposition producer that launched Artboat, Nova and Bridge Art, an international art fair of the early-aughts boom that led the emergence of art fairs as new mobile market vehicle on a global scale. Post the '09 crash that brought on the global financial crisis, Verge Art emerged as an alternative branch of the project, followed by New Material. Please visit the Expositions section of this site for an overview of these, with a variety of available documentation.

BRIDGE MISSION STATEMENT "The original goals of Bridge in the late 1990s emerged from the bedrock notion of interdisciplinarity, of a need to recognize interdependence of art across the disciplines, and to think and combine them where appropriate; we feel this concept has further evolved over the decades. The simple belief behind Bridge magazine is that separate fields of inquiry can and should be thought of as having shared, intersectional horizons. Today, every existing worldview, whether scientific, philosophic, aesthetic, political, or literary must acknowledge its limits or risk being defined as obsolete, unachievable, and incoherent."